No Brains. No Heart. The Tea Party/CNN debate. Another Journalist Revels in Ignorance about Dominionism

By Deborah Newell Tornello On September 20, 2011 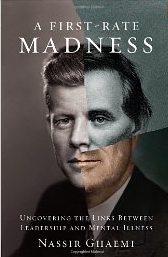 As I have written about before, I am more than passingly familiar with the euphoria of creativity-filled up-cycles as well as the darkness of their unfortunate counterparts, those hideous depressive phases during which everything seems boring or bleak; tears and hopelessness are the order of the day; and even simple activities like picking out a shirt or brushing hair turn into loathsome, dreaded, and even inexecutable chores–forget actually doing anything productive. So it was with great interest that I dove into the literary results of Dr. Nassir Ghaemi’s intriguing research and analysis, A First-Rate Madness: Uncovering the Links Between Leadership and Mental Illness.

Mental illness–well, I like to call it being Mentally Interesting, for which descriptor I will thank the writer (and fellow Mentally Interesting Person) Jerod Poore–is not quite the taboo subject it was a few decades ago; it is no longer a hush-hush domain to which mysteriously disappeared classmates are consigned (“Where did she go?” “I don’t know, but I heard she had a nervous breakdown“); and–thank the Fates, along with relatively recent advances in neuroscience–it’s no longer a complete mystery (although, it must be said, the human mind is inarguably the last great frontier, and modern medicine has only just begun to embark on its journey toward solving the biochemical and behavioral puzzles therein).

The core thesis of A First-Rate Madness: Rational, calm, balanced, agreeable, reasonable, conciliatory, and sane people are lovely to have around. Ahem. But when all Hell breaks loose, you want a leader who can stand at the edge of the abyss, confront the monster within, and stare that horned and tentacled bastard down. For this kind of nation-saving and history-making leadership, only a Mentally Interesting person will do, knowing as he or she does (like the back of the hand, in fact) the precise reach of said monster’s limbs and the explicit scope of its awfulness.

At the outset, Ghaemi identifies the parallel nature of a clinician’s diagnosis (of a mentally ill patient) and a historian’s analysis. Both require a careful study of symptoms, of course, as well as an identification (if possible) of genetic components and an overview of indicated treatments–those sought, those avoided or not yet available, and those which succeeded (or failed).

Invoking the personal and fascinating stories of figures such as Winston Churchill, Abraham Lincoln, and Mahatmas Gandhi, Ghaemi then points to the qualities–conspicuous in their abundance–that variously characterize those leaders who suffer with (and also, to be sure, exalt in) mental illness throughout the course of their lives, those being: Creativity, realism, empathy, and resilience.

In the case of General Sherman, for example, we are shown a leader who wholly transformed warfare from the faltering Napoleonic model of concentrated frontal assault to a bold and creative approach which took into account the economic and moral aspects of rebellion and thus enabled a totality of destruction that was at once brutal and wildly successful. But he was not, despite popular myth, a glorifier of war. Ghaemi explains:

Reconstructing the real Sherman, with his coercion as well as his complexity, means recognizing that he had manic-depressive illness. In fact, of all the leaders in this book, I would say that Sherman is the prototypical mentally ill leader. In different aspects of his bipolar disorder, he displayed many of the powers of mental illness to improve leadership: depressive realism, empathy for the South (before and after the war), resilience beyond measure, and unique military creativity. Yet until recently, no historian had carefully assessed whether Sherman himself suffered from deep, indeed sick emotions. This task was taken up by Michael Fellman, a gregarious American, self-exiled in Canada since the 1960s, where he is professor emeritus of history at Simon Fraser University. A specialist in the American Civil War, Fellman had been taught traditional history: trace the documents of who did what, who said what, and what happened; pull it together for the reader; and let it go. Such history seldom made well-grounded analyses about the abnormal mental states of the people it studied.

Having himself suffered a painful depression, Fellman realized that traditional history was mistaken because such conditions have an enormous impact on people–famous, infamous, and obscure. He became attuned to evidence of abnormal mental states among the Civil War figures he studied. Besides Lincoln’s melancholy, Fellman discovered depressive tendencies in Robert E. Lee, and outright mental illness in General Sherman. What followed was a biography–researching and reporting facts based on primary sources–that a century after Sherman’s own memoir unmasked the whole man: greater than we thought, in part because he was much sicker than we knew.

Greater than we thought, in part because he was much sicker than we knew.

A First-Rate Madness is suffused throughout with this generosity of spirit, with bittersweet reflections and a profoundly humane sensibility. (In fact, while reading it, one might wonder if the author himself is also a Mentally Interesting human being, so impeccable and accurate are his observations of the afflicted.)

To wit: the layperson, upon reading about the life and times of Dr. Martin Luther King, might infer that pacifism and idealism were both central components of his character and dominant forces that controlled his worldview. Not so, asserts Ghaemi, who proceeds to construct a portrait far richer, and more textured and heartbreakingly real, than any study of Dr. King this writer has encountered to date (my emphasis):

The Martin Luther King of popular mythology is a cardboard icon, brought out once a year on a holiday, with little resemblance to the real historical man. The cardboard King was a pacifist idealist; he wanted everyone to make peace and hold hands. The real King was an aggressive, confrontational realist; he believed that all men were evil in part, including himself; he thought that violence was everywhere and unavoidable, including within himself. “Nonviolence” did not mean the absence of violence, but the control of violence so that it was directed inward rather than outward.

And there are many, many more such insights to be appreciated in this fine book, as well as a clear-eyed analysis of those leaders whose personalities might best be described as even-keeled, rational, or else well-balanced, but whose marks on history–if even they made any–are mostly pastel-hued and watery as opposed to fierce, glittering, bloody, or–invoking here the title of another enlightening book by a thoughtful psychologist (Dr. Kay Redfield Jamison)–touched by fire.

A written work may be described as truly successful, I think, when you find yourself quoting it in your head, even weeks and months after having read its final passages. Inasmuch as I have been doing just that–taking in the words and deeds of our current American leadership with new eyes, even–I’d say that A First-Rate Madness is an extraordinary accomplishment. And I highly recommend it.

Unlike numerous recently-published tomes, Dr. Ghaemi’s book–refreshingly, and perhaps intentionally–steers clear of former half-term Alaskan governor Sarah Palin, despite her erratic behavior, propensity to deceive, and general mental instability, all of which are topics of analysis you’d think would be irresistible to any academic psychiatrist, particularly one who’s exploring the connection between mental illness and leadership. When I wondered aloud why this might be so, my eldest son’s quip provided the obvious answer:

“That’s because she’s not a leader, Mama.”

UPDATE: be sure to check out Dr. Ghaemi’s blog, Mood Swings.

One Response to Book Review: Nassir Ghaemi’s A First-Rate Madness is a first-rate read