Will Any Conservative Sites Link To This? Fat Chance! Miracle schools, vouchers and all that educational flim-flam

A Southern California Tea Party activist and Republican Party official came under fire Saturday after it was revealed that she sent an email including an altered photo depicting President Barack Obama as an ape.

The e-mail sent by party central committee member Marilyn Davenport shows an image posed like a family portrait, of chimpanzee parents and child, (That’s right, the deceased mother of the President of the US is portrayed as a chimpanzee, too.)with Obama’s face superimposed on the child. Text beneath the photo reads, “Now you know why no birth certificate.” 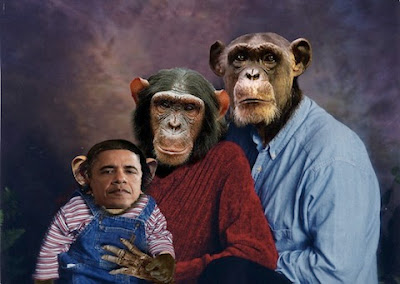 County GOP Chairman Scott Baugh said he “received it Friday afternoon and quickly responded with an email telling Davenport it was “dripping with racism and is in very poor taste.” Baugh has called for Davenport’s resignation, and says the incident should be referred to the ethics committee.

“If Davenport refuses to resign, she should be ousted, said Michael Schroeder, former chairman of the California Republican Party and an Orange County GOP activist. “I looked at it, and my jaw dropped,” Schroeder said.”

Davenport responded initially by blasting the leak as “cowardly,” and attacking the “liberal media.”

Scott Moxley of the OC Weekly pointed out some startling facts about Orange County:

Here, one of our Republican politicians welcomed the inauguration of the first African American U.S. president in early 2009 by sending out an email that depicted a watermelon field in front of the White House.” 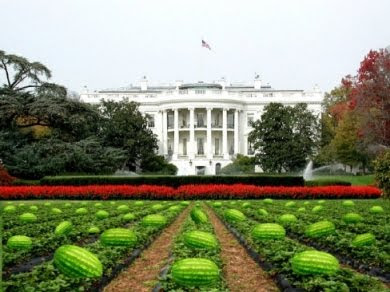 Reached by telephone before her “official” comments on the matter, Davenport told OC Weekly “Oh, come on! Everybody who knows me knows that I am not a racist. It was a joke. I have friends who are black.(Emphasis mine.) Besides, I only sent it to a few people–mostly people I didn’t think would be upset by it.”

I wonder if any of Davenport’s black friends received the email, and why did she think that some people might be upset by it?

In her “official” statement, Davenport said that “I will NOT resign my central committee position over this matter that the average person knows and agrees is much to do about nothing.” The full statement can be read here.

KCAL and KCBS reported during their respective 10 and 11 p.m. broadcasts that in a telephone interview Davenport blamed the media for this controversy and slammed down the phone.