Paul Krugman Offers Only Half the Story of Our “Low, Low Taxes”

As I’ve noted before, when compared to other wealthy countries, the U.S. has an extremely “limited” government and one of the lowest tax burdens.

Paul Krugman’s doing a yeoman’s job trying to insert some economic reality into our discourse, and today he offers this corrective to the popular myth that we’re “taxed to death”:

I thought it might be useful to have a cleaner comparison of the major advanced countries. So here are taxes by all levels of government as a % of GDP, removing the clutter by only looking at the G7, and using data from 2007 so that things aren’t confused by the effects of the Great Recession: 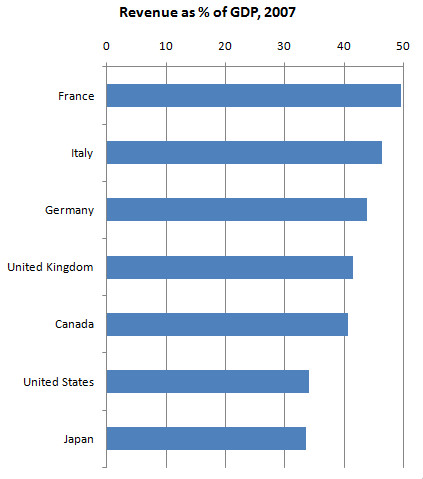 Two additional points bear mentioning (again). First, while we pay somewhere around 10 percentage points of GDP less in taxes than our friends in Western Europe, that’s an apples-to-oranges comparison because their taxes buy free or very inexpensive comprehensive healthcare, free or deeply subsidized education all the way through grad school and more generous retirement benefits. We have to pay for that stuff out of our pockets.

Second, overall rates obscure the more important issue of who’s paying what. I pointed out last week that while tax rates have dropped significantly for many since Ronald Reagan took office, people with low incomes have seen their tax burdens rise significantly — they’re subsidizing the cuts that wealthier people have enjoyed.

Also, the share picked up by individuals and families has increased significantly over the past decades. As I noted a few weeks back:

How can we reconcile the simple fact that Americans are living in one of the least taxed countries in the developed world with the reality that many working people feel they’re being “taxed to death”?

Well, consider this: in the 1940s, corporations paid 43 percent of all the federal income taxes collected in this country. In the 1950s, they picked up the tab for 39 percent. But by the time the 1990s rolled around, corporations were paying just 18.9 percent of federal income taxes, and they forked over the same figure in the first decade of this century. We – working people – paid the difference.

I write for AlterNet. I've written a book, The 15 Biggest Lies About the Economy, which I recommend. You might also consider following me on Twitter.