Smuggler’s Paradise: Guns, Drugs and Violence in the Southwest, Part 1 of 2

PHOENIX, Ariz.–The endless carnage of the Mexican cartel wars may seem a world away from the climate control and free Starbucks within the Phoenix Convention Center, where leading border security experts gathered this month for the fifth annual Border Security Expo. Yet it’s only 150 miles from downtown Phoenix to the northernmost cartel war zone of Nogales, Sonora. Even closer are the badlands on the U.S. side of the border where last December a Border Patrol agent was killed in a firefight with Mexican drug smugglers. They were armed with AK-47s purchased legally from a gun store in Glendale, Arizona, less than a year before. 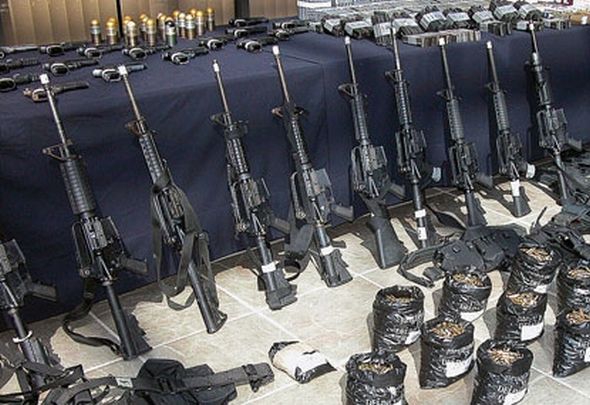 More than 73,000 firearms have been seized in drug raids or recovered from the scenes of cartel gun battles in Mexico since December 2006. According to law enforcement officials, “90 percent of the weapons that could be traced were determined to have originated from various sources within the U.S.” Weapons sold over-the-counter in the U.S., including thousands of cheap, military-style assault rifles, are being used in Mexico to commit horrific violence on a massive scale.

Conservative politicians routinely demand that the federal government to do more to secure the border — often championing nativist and draconian anti-immigrant policies. Yet they reflexively oppose even modest efforts by law enforcement to better track the flow of high-powered weaponry.

Meanwhile, the violence in Mexico continues to escalate. More than 34,000 people have died in the cartel wars since late 2006, many of them law enforcement officers, elected officials, or innocent civilians. On February 15, a U.S. Immigration and Customs Enforcement agent was shot and killed and his partner was seriously wounded while they were investigating cartel gunrunning in Mexico.

That same day marked the start of the Border Security Expo, a gathering of law enforcement and government officials from the U.S. and Mexico, as well as private security and defense contractors.

Standing at the Phoenix conference hall podium, U.S. border security expert Alonzo Peña, the former Deputy Director of ICE, called for America to own up to its responsibility for the bloodshed in Mexico.

“We are the consumers of the drugs and we are the suppliers of the weapons,” said Peña. “The drugs come to America, the money and the guns go back. U.S. weapons are giving these cartels the firepower they need. Much more needs to be done. There is a huge gap between what we are capable of doing to stop illegal gun trafficking to Mexico and what is actually being done.”

Last spring, the Bureau of Alcohol, Tobacco and Firearms proposed to narrow that gap with an emergency regulation that would require the roughly 8,500 federally licensed firearms dealers in the four border states to report the sale of multiple assault rifles to the same person in any five-day period.

This proposed new measure would neither prevent nor delay the purchase of any firearms. It’s designed to thwart the common practice among gunrunners of deploying “straw purchasers” to buy assault rifles in bulk. The proposed regulation mirrors a law on handguns that has been on the books since 1993, requiring gun stores to notify law enforcement authorities whenever a person buys two or more handguns in the same week. 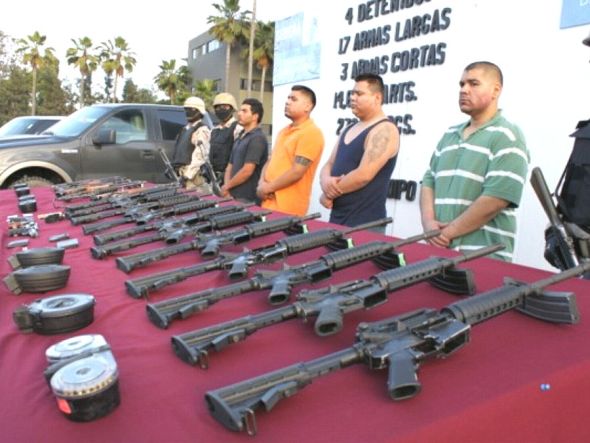 High-powered assault rifles confiscated by Mexican soldiers in June 2009 from the Tijuana Cartel.

The recent indictment of 17 alleged gunrunners in Phoenix details the kind of buying patterns the proposed regulation targets. According to the indictment, Uriel Patino, a legal resident of the U.S., paid cash last Nov. 3 for two AK-47 rifles from Lone Wolf Trading Co., a Glendale, Ariz. strip mall gun store. A week later, he came back and bought 10 more AK-47s. Two days later, he purchased five more AKs. A month after that, he bought 20 more. In all, he bought 232 weapons — 42 handguns and 190 assault rifles — all from the same store, in 18 visits. With each purchase, Patino passed an instant background check and signed a form attesting the firearms were for his personal use.

His claims were no more ridiculous than the National Rifle Association and other gun lobby groups portraying the proposed anti-gunrunning measure as a serious attack on the second amendment rights of law-abiding citizens. But that is just what they did.

“This administration does not have the guts to build a wall, but they do have the audacity to blame and register gun owners for Mexico’s problems,” said Chris Cox, the chief lobbyist for the NRA.

Facing stiff opposition from the NRA and its allies, President Obama repeatedly delayed approval of the emergency regulation. Now it may be too late. Last Friday–three days after the ICE agent was murdered in Mexico–the House of Representatives voted 277 to 149 to block the Obama administration from implementing the anti-gunrunning regulation.

Two years ago, a Department of Defense study concluded that cartel violence had destabilized Mexico to a point that it was at risk of becoming a failed state, meaning a total collapse of its civilian government.

But when the U.S. law enforcement professionals who are tasked with securing the border ask for commonsense firearms regulations to stem the flow of high-powered weapons to Mexican drug cartels, right-wing forces put the interests of the firearms industry above those of national security and federal law enforcement officials in both nations.

“We are being outgunned,” said Luis Carlos Nujera, the State Secretary of the Department of Public Safety in the state of Jalisco, whose capital, Guadalajara, erupted in violence in early February after two cartel leaders were arrested.  ”The aim of the cartels is to destabilize and create panic. To do this they are using better and more modern firearms than many of our state and local police agencies possess.”

At the Border Security Expo, ATF officials made it clear that interdicting firearms bound for Mexico is a top enforcement priority for their agency. “We have ‘Project Gunrunner’ groups in Phoenix and Tucson that were created specifically to address the gun trafficking that directly impacts the level of violence in Mexico and the U.S. border region,” said James Needles, the Acting Special Agent in Charge of the Phoenix Field Division of the ATF.

Needles said that in May, the ATF will open a new anti-gunrunning office with seven agents in Sierra Vista, Ariz., just north of the border. “We’re going after the Arizona-based distribution cells,” said Needles. “The street agents know what’s needed. Our biggest hurdle is Washington.”

In the 48 hours after the House of Representatives voted to block the anti-gunrunning regulation, more than 40 people were killed in Ciudad Juarez, Mexico, a border city about the size of San Antonio, Texas. Among the dead were four Mexican police officers, shot down with assault rifles.

Originally published at Media Matters for America at  http://mediamatters.org/blog/201102250023

David Holthouse is an investigative journalist with Media Matters for America who lives in Alaska. His work has appeared in Rolling Stone, The Nation, American Prospect, and other publications.